I know that I probably read things way too fast to even create a blip of regard on your radar. Ok, and really that just means by the time I remember to tell someone about something great to read, I am already halfway through the next, so it’s probably not even any longer a part of my own radar.

So this is big.

I just finished the new bestseller, Gone Girl. And by finished, I mean, came close to making my eyes bleed to be done in time for dinner. It took me less than a week, and not because I am a fast reader (yes, that plays a part), but this was a literal page-turner. I could NOT put it down. Even when it was one in the morning, Mike deep into his slumber-induced muscle spasms, and my eyes begging me to let them shut, I kept reading. 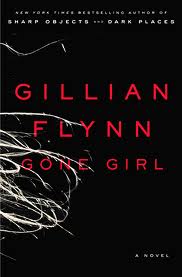 Genre? Romance-Noir? Slash, Whodunnit Murder Mystery? Slash… I don’t know–it’s a lot of things. A lot of good things. Because it’s a story where you can’t choose a protagonist. Your mind (your morale) is all over the place with what’s right, what’s good, what’s the bottom line… and honestly, guys, in the end I wish it could just keep going. I mean there is SO MUCH left to answer. I have questions. Almost as many questions as I have about the girls who share a body on TLC. Almost.

Seriously though. If you’re looking for an exciting read (that doesn’t involve kinky intimacy amongst strangely successful twenty somethings), this is THE readin’ for the season. Now, I can’t say it’s one of those great reads that completely mirrors the way life should be. It’s (hopefully) the farthest thing from that. And therein lies it’s magic. It’s brilliant, sheer genius and not something that I could have ever, ever thought of. Gosh, and you really have to hope you don’t know anyone who would. (P.S. I am talking about the character, not the author. I certainly wish i could think of this story. Props Flynn.)

Buy it now. Or borrow it from me. However you can get your eyes on it.

A+ from me. (It was really hard not to write “in my book” right there)

« The Office is closed
Book versus Movie: Water for Elephants »