Where To? | Why Every Falcon should head north for the winter

A December game versus Green Bay offers a trip well worth your fan-manship. Football friends, read on.

Ever thought about hitching a ride with Matty Ice on his way to training camp? Literally on him. Or giving him the ride? That’s exactly what happened between neighborhood kids and the Packers during their training camp this summer. In fact, it happens every year and stands as one of the most stand-out traditions that exists in pro football today (in my opinion, of course).

Every morning, neighborhood kids gather at the foot of the Lambeau Field, decked out in blonde wigs, Number 12 jerseys and gobs of green and gold beads, jumping, screaming and hoping with all their might that a player will accept his offer to ride his (or her) bike to camp that day. In exchange, the kids carry their helmets and run alongside the players, or jump on the back of the bike (or their shoulders) to make the trek together. 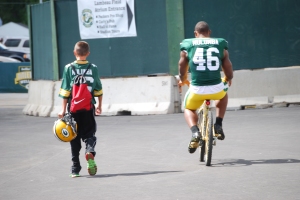 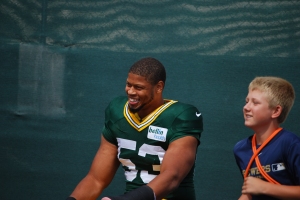 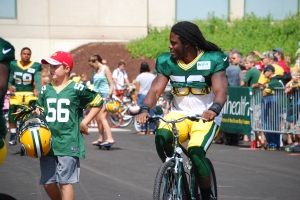 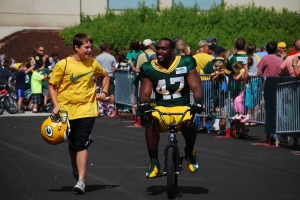 It’s not a long way, maybe three minutes of conversation tops–but it’s the most emotional I’ve ever felt about any sort of sports walk (except maybe when it was my cousin).

The kids aren’t even the astounding part. During training camp, the crowd is like gameday in Atlanta. Slews of people with cameras, face-fans, jerseys, face paint, the aforementioned wigs, headbands, pom poms and literally anything else you can “Packerize.” The crowd follows the team to Nitschke Field where they wait in line for a spot on the bleachers to watch a few plays from that day’s practice. And for a small town of Green Bay, who boasts just upwards of 100,000 people, that’s a percentage of local turnout that blows Atlanta’s regular season games out of the water.

That’s exactly the reason you should make the trek this year. Packer fan or not, the ambiance is awe-inspiring. It makes you want to root for these guys (except on December 8th), but mostly it makes you want to be that kind of fan. It makes you wish a little bit that Atlanta was the from-the-depths team who succeeded solely out of its community’s desire to see them do so. Green Bay’s rich history and fan-owned Packers conjures up envy for an entire town truly bound together by everything Lambeau.

(No idea what I am talking about?) Here’s a quick history – the Packers began in early 1900s and muscled their way into the nation’s football league with a pooling of funds by the community. Ever since, its been a team owned by the fans, a town running in the name of the Packers and a following that inspires way, way outside of the lines of this tiny little town.

Why should you go? Aside from a new, nonstop flight to Green Bay on Delta, there’s a stadium tour that gets you in the tunnel, on the roof, through the boxes and as close to field as anyone’s allowed. Take a trolley (or Segway!) tour through the Packers Heritage Trail and see Green Bay through the history of its claim to fame.

It’s my pick for hidden gem of the year in travel. So when you’re weighing your options, ask what Mr. Rodgers would do, and double check your calendar to make plans to celebrate your team on the road.