Folks, we made it.

Not to summer, not to the six month mark (although, we’ve almost got check marks next to both), but to the great state of Texas and back, on a plane. We even stayed in a hotel. Yep – we’re really livin.

The plan included heading across the country with the new addition to our family. I mean, he’s a great little guy who brings a lot to the table as far as socializing goes – but you just can’t ever know someone until you travel with them, you know? Turns out, he’s a pretty penny of a traveling companion, so we’re totally inviting him on the next trip. Hopefully, by then Mike and I will be a little more chilled out, because if anyone was in danger of damaging their companion reputation, it was us.

We had the suitcase packed – just one, so we would only pay the carry-on fee once – we tested the seams of his diaper bag (the unmatched backpack from SkipHop) and a carefully selected wet bag from Logan & Lenora to hide our messes. We had it perfectly set up, prepared for any sort of emergency and any obstacle the airport wanted to throw us. 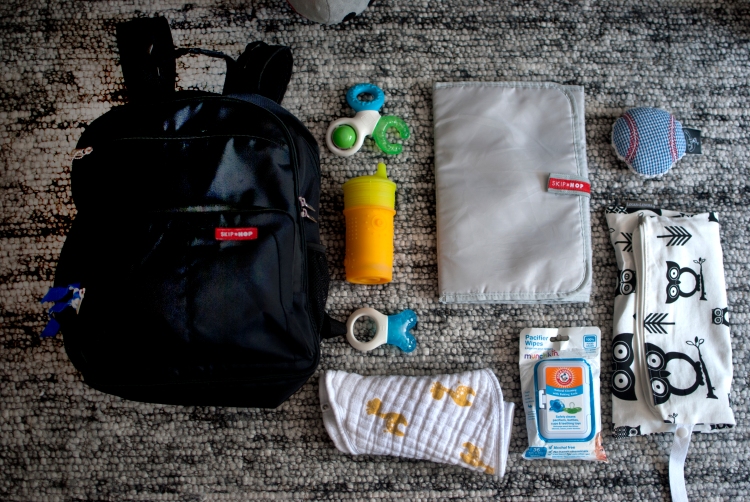 But the obstacles were more prepared – and they had nothing to do with Mac. Our bag was 7 pounds overweight. BLAST! We had good intentions of less baggage for more efficiency. But, for the ONE HUNDRED dollars they were trying to charge us for those measly pounds, efficiency apparently exists not. ONE HUNDRED DOLLARS, folks. I don’t even know which onomatopoeia to use here. I’m even frustrated again just thinking about it. Luckily, here’s where Mac earned his first big brownie points as a traveler. I don’t know if he cracked a grin at the Sky Cap, or if he stuck out his bottom lip (his infamous bottom lip, at least in our family), but when the cap asked me what we wanted to do, and I told him I wanted him to see an even 50 pounds on the sign, something worked. Even when I said Mike would give him a twenty and all Mike had was a one (which he still gave him, for like, a diet coke or something), he let us through. Thank you, baby sympathy.

SIDE NOTE, folks: I had to say good bye to two pairs of shoes on the trip – one ridiculously tall pair of leather wedges and a brand-new pair of strappy nudes – and our bag was still 4 pounds over on the return trip. We still didn’t have to pay. Mac points are skyrocketing. And now, we’re going to buy one of these.

Our second obstacle came as a fault by no one but yours truly. I forgot the bottle. It took me like a week to pump that meal for Mac – meant to pacify him on the takeoff – and he wouldn’t even get to enjoy it. Instead, we had to bust out all of the bottle supplies, the powdered formula and (in case he wouldn’t take the bottle), the baby Tylenol (which ended up all over the seats, our laps and Mac’s new traveling outfit.) We should have hooked on his Aden & Anais Burpy Bib (it doubles as a burp cloth) sooner. Luckily, the little guy took the bottle down and went fast asleep. 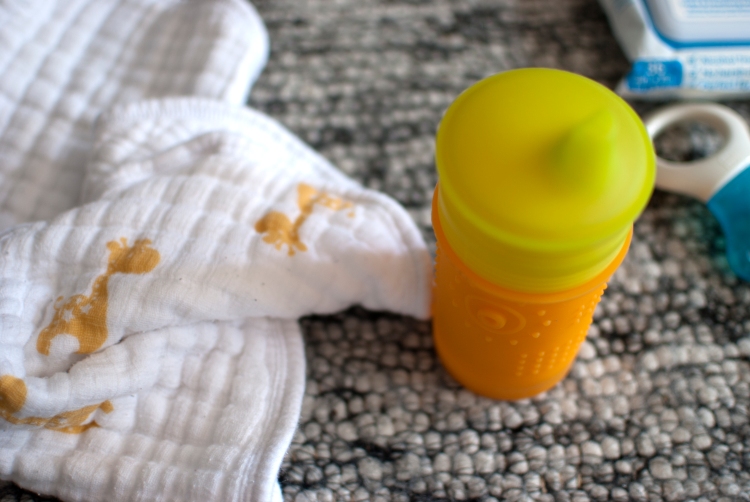 Another Side Note: Get your hands on one of these silicone wrapped bottles from SiliKids if you aren’t still using a bottle. You’ve got an easy-to-clean glass for the table you’ll be using once you arrive, but you (read: your little one) can drop it without breaking it during the trip it takes to get to that table, which happens about 456,897 times on the plane.

When a bottle doesn’t send your snuggled off to dream land fast enough, or for long enough, this little gem from MAM saves the day. Small enough to slide in the last free pocket you have in the diaper bag and easy enough for the little one to grab onto (by way of hand and mouth), it provides lengthy relief for the last leg. Mac prefers the Mini Teether because he can get it lodged just so on those slow-to-erupt back molars. Or, go the you route. Mac is obsessed (we’re taking it as a sign for early verbal commitments to D-I schools) with the baseball rattler from Mud-Pie. 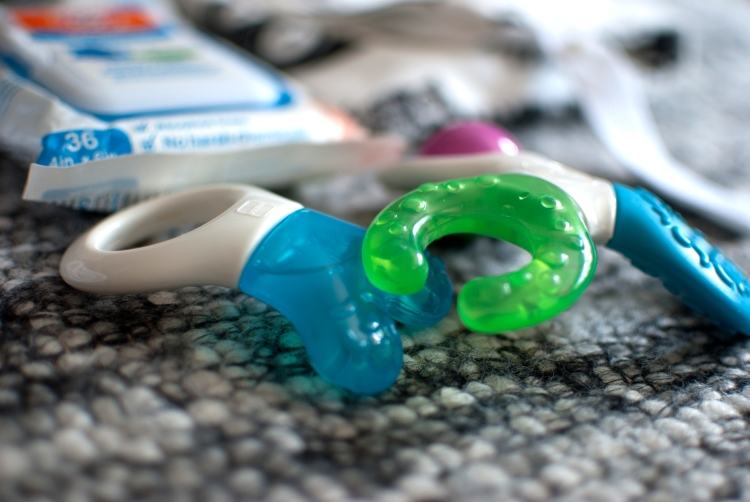 Of course, when our little guy woke up, he wasted no time announcing so by literally shooting a rocket out of his diaper. What were high hopes of not having to decipher the code that is changing a diaper on an airplane went down – all the way down the aisle, leaving the equivalent of a smoke signal for every passenger seated past row 19. With a wall sit like I haven’t done since college and quick reflexes to keep Mac’s fingers off the toilet seat (thanks largely in part to my sweet new diaper changing pad that came in the backpack and a frenzied clean up with our Pacifier Wipes afterwards), we managed. “We managed” became the mantra, and not only thanks to our great little guy, but because we had the right tools in our bag. We were ready for these obstacles, tackled them like champs and came out ready for the next one. So, let me ask you … what’s in your travel bag?