I talked Mike into watching a movie the other night. Now, that may seem unusual to those of you who know Mike pretty much watches movies 99.9% of his free time, but let me revise the statement by specifying that it was an Oscar nom. That fact and the realization that he’d heard nothing about this one, specifically made him wary of another experience like Martha Marcy May Marlene (wack!).

So, we built a fire, cozied up in all our blankets on the floor and at least created a great starting place for what could be a giant snooze fest for Mr. Colosimo. 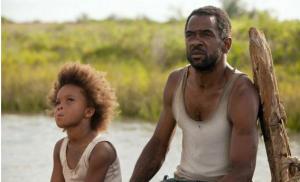 Well, snooze fest is what we’ll call the underestimation of the year. BOTSW was incredible. It moved quickly through scenes of bright, vibrant energy pulling the storyline along in the same way that a short story does. That story is of a group of rebels refusing to leave their homes on the “other” side of the levee that Louisiana built to protect the coastline from floods. Inevitably, that means that the little community of outlaws could lose their entire existence at the hands of one bad storm.

But, instead of living in fear , they celebrate each day of life in what they call, “The Bathtub,” with parades, feasts, music and laughter. It’s a true representation that not only is ignorance bliss, but it’s also an efficient way to live life to the fullest.

The performances in this film were noteworthy as well. A young first-timer plays Hushpuppy, bringing a ultimate cuteness to one of the dirtiest children you’ve ever seen. Another first-timer plays her dad who has calloused his heart and soul to anything and everything that would remind him of his disparaging place in life. Watching this film is like watching the paralleled demise of both a habitat and a man, but the rebuilding of a home.

It’s weird, yes. Apocalyptic, definitely. But it’s creative, unique and really humbling to watch. I would encourage everyone to put this on your queue or at least your radar. It’s not a happy story, but it does make you feel good, so in that sense, it’s absolutely worth it to swap a blockbuster action flick for this little diddy.