Movie Monday Takes to the Silver Screen | Bests and Worsts

Okay, here’s my admission: I didn’t watch the Emmy’s. I didn’t even record it, flip to it during commercials or stay up to see who took home the biggest prize. I can’t even tell you what the biggest prize is in the Emmy-world.

Seriously. Mike and I watch TV every, single night. We watch a LOT of what we record on DVR, but usually that’s just because we need to get to bed earlier and cutting out commercials really helps us find better excuses.

Recently, I will expel the information that our DVR is suddenly “close to capacity” because of a new obsession over crime dramas. And Castle. They’re the best because the formula gets you in the story and out again in one, one-gour episode. It’s none (or rarely) of this “to be continued” crap that knocks you off the wagon if you can’t keep up week to week. The action is signed, sealed and delivered in that one episode. So, you HAVE to watch it once you start it. You have to.

Anyways, maybe the DVR is our demise for our lack of Emmy-passion (or even curiosity), or maybe we suck at choosing the shows to watch. We’re feeling fine about it. Long live Snooki.

I did not however lose my interest in who people were wearing and how they looked. So, in true Jenni Williams Colosimo fashion, here’s the bests and worsts of the night, in fashion. Ahem.

The Bests: The year of the gorgeous skirt… and of Sofia Vergara.

I know Chevron is in right now, but this may be overstepping it.

Usually such a fan, but someone cut her hair AND her straps, it seems. 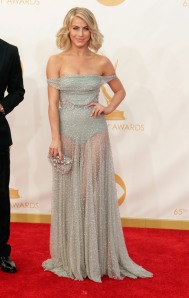 Still in dance-floor costume, I presume. 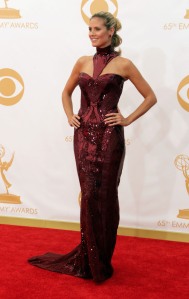 « Wednesday’s What To Eat | Anything with Whiskey
Where To? | Why Every Falcon should head north for the winter »