If you’ve ever read a review from me, you know it takes a lot to say I hated a movie. But, let the pigs fly, because this one really sucked. And not just because the “spirit” in question literally sucked people out of this world, but because it was awful. Even with super cute Ashley Greene (who looks more and more like Kristen Stewart’s more attractive younger sister) and a post-Harry Potter Draco Malfoy, it just downright fails as a horror movie. Actually, it fails as any movie. It feels like a rough draft, with lots of great potential that never got flushed out. Greene’s got a great scared face, but when they threw in a shower scene just to be able to show her in her underwear, it was obvious this was just a lot of generic thrown into one script. I get where the writers were going (a second look at a 70s-era paranormal experiment gone wrong), but it doesn’t look like they had the team to make it happen. If you do end up spending what you could have bought a tank of gas with on this entertainment guzzler, then expect serious blue balls of cinematic experience. Lots of build-up that makes you grip your armrest, and then nothing but a let down. Sigh – It was actually a relief when everybody died and it was finally time to just be over. Just kidding – you’ll have to see for yourself… if you’re concerned, at all. I gave it an ALMOST. 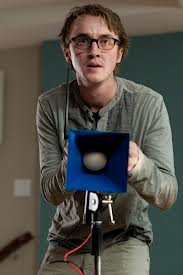 « Laundry day is losing its sparkle
Why the temperature is going down. »