Well, it took me a little while you guys. I saw this a couple of weeks ago at a quaint dinner theatre in Brookhaven. I loved it. I thought it was a little long, but epic all the same. It was filled with moments of pain, anguish and heartache that truly gripped me to the bone. I thought performances were stellar (except maybe the weird tonal quality of Russell Crowe‘s voice? Anyone?). I thought cinematography was mind-blowing and overall, this was truly a one-of-a-kind masterpiece that is deserving of all it’s nods. I even accepted Anne’s nod, even though most of you loyal readers know she’s never ranked high on my list of favorites. (or second favorites) 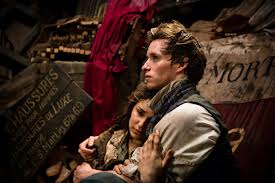 This was my original review, my originally untouched thoughts and what I would have told anyone who hadn’t seen it yet… until I talked to my cousin. The aspiring stage-star herself gave it a disappointing review, stating that the only good performances were Anne Hathaway and Samantha Barks. In fact, right now, I am looking back again at the conversation and her words were exactly that she “hated” it.

I know, right!? I mean, it’s a classic tale… one of the world’s most beloved stories… done well by the same guy who directed best picture winner, The King’s Speech (That’s Tom Hooper). But coming from one of their own, a performer herself, raised on the stage (literally guys, she grew up performing, whether on an actual stage or creating her own) rebukes the classic tale. It made me rethink my experience.

So, post-jade, this is my new synopsis: I still think it was incredible. I wish Barks had earned a nod for her role as Eponine, because when I think back to the times I felt hit in the gut the hardest, it was her performances. Sure, Anne, Anne, Anne… blah, blah, blah (spare me), but this girl won me over. Hugh Jackman did it for me. I can’t deny it.

From the very first scene that reminded me of how scary the Disney movies used to make the villians’ numbers (i.e. Ursula coming up out of the ocean), I was hooked on the pain for gain in his eyes, and touched by his devotion to the conflicted spirit with good ole Valjean.

Plus, Jackman is so freaking adorable, you can barely not tip your hat to whatever he does.

In conclusion, you need to see this in the theatre if you’re going to at all. And because it’ll take your entire day to see, yes, it is actually worth the $20 it will cost you to see and eat a popcorn. If you miss it, keep it in the back of your mind and see it on stage again first.Let the story take you over, let it toy with your own spirit and then decide if any movie is undeserving of a nod for retelling such an incredible tale.