To any and all, I’ll say that you probably read the Fitzgerald novel in high school. You may have half-heartedly skimmed the Cliff’s Notes to pass a few tests, quickly forgetting what the storyline even represented. You may have glossed over the flowery language and ritzy ideals, ignoring that in the midst of an insidious drought, something so gorgeous, hopeful and enviable could even exist.

And then they cast Leonardo DiCaprio – Looking as fine, smooth and youthful as he did as Jack, aboard the Titanic. My heart skips a beat. And it did, when he first appeared on screen, like a rush of endearing adrenaline, the sighting of an old friend, someone who brings back that feeling of “home” via butterflies in your stomach. 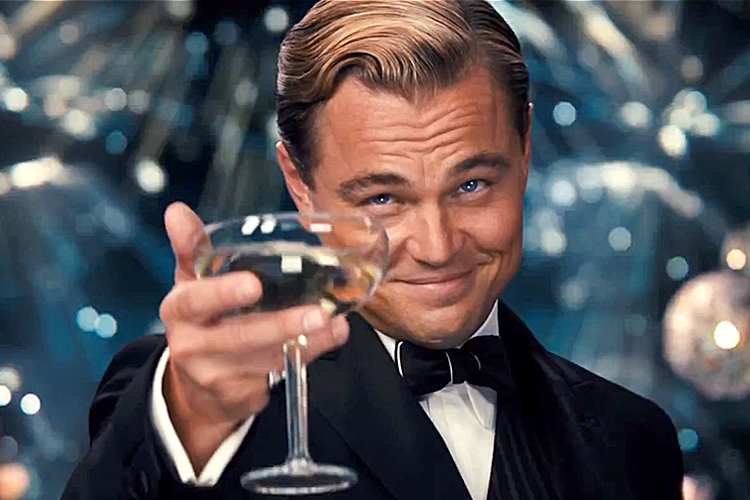 Gatsby plays out this way for its entirety, more or less. And to farther enuniciate “that way,” I’ll add that it’s gorgeous. The cinematography is outstanding, breath-taking, doing above-par justice to the writer’s stunning vernacular. Casting is spot on – even with wormy Tobey Maguire pulling off a full-faceted narrator. Carey Mulligan embodies the innocent guilt of Daisy to the point, I now envision her when remembering the novel.

Seriously, I’ll hunker down for a minute to admit that I went into the film with two very separate expectations – one that I’d freaking LOVE anything based on The Great Gatsby (duh), but then one fearful of what I’d find executed there. Assuredly enough, both of those selves left satisfied to the point of gluttonous indulgence.

Director Baz Luhrmann gets a bad rap sometimes. I’m not sure why, though. His fame rests in bold, big pictures, telling epic stories, well, epically. Moulin Rouge? Bursting with color and fun. Australia? A hurricane of emotion illustrated by ridiculous landscape. Romeo and Juliet? Classic, right? And completely directed in Shakespearian.

So, mostly we as a community of watchers should just trust that he sees the story for its beauty and depend on him to fully exercise it… maybe to the point of exploitation. And I think that’s why his adaptation of Gatsby did so well. Excess and exploitation are at the center of the story, so why not put it all (and I mean ALL) out there? From a score directed by Jay-Z to a bill pulling huge names and the Oscar-winning costume and production designer Catherine Martin (who’s also the Mrs. Baz Luhrmann), this film has seriously got it going on.

So, in case I’ve been vague – this film is phenomenal. From start the finish, from editing to mixing to powdering noses and pin curling bobs, it’s eye candy from the 20th century for those of us born in the wrong era and those of us who love a good culture mosh. Seriously, the dancing, the speaking, the flowers and the drama intertwine into one huge mess of fabulous – Something that only F. Scott Fitzgerald has the ability to put into words. Thank goodness he did.

Oh, and see it on the big screen. Sparkle is always better big (just ask Ke$ha).