Gosh. You know, sometimes movies are just so dang cute that you hate to jade people who idolize reviews with words like “predictable” and “familiar.” And unfortunately for this solidly adorable and satisfying flick, those are two adjectives I can’t leave out. But with the negativity out of the way, let me say that it’s almost impossible not to enjoy this little gem. Paul Dano plays a tough case of writer’s block, living in the shadow (and the pressure) of his stint as a genius first-time novelist out of high school. At the suggestion of his shrink, he whips up a story based on a dream of something super simple–his dog. A quirky redhead with freckles and a pucker complimenting his dog, no less. But something different spawns from this light dream–it just so happens to come true this time, sending him on a journey through the expansive (and powerful) creativity of his own imagination, finding love and tough life lessons along the way. The outcome is absolutely one you’d expect, but the way it gets us there is worth the plane. With such a great cast (Annette Benning and Antonio Banderas playing the supportive, but clueless parents, Chris Messina playing an uber lovable big bro and the brains behind the cuteness (a.k.a. the writer), Zoe Kazan stars as the freckle-faced cutie herself. I honestly don’t remember her from anything, even though I’ve seen some of the stuff she’s got listed on the ole IMDB resume, but she has an odd sense of familiarity about her. As in, whether her character exists or not, you’re rooting for there to be some unexplainable justification for why she can. You’re rooting for her, too, despite the fact that this is her creator’s story. HE was the one who imagined her, brought her to life and basically controls her fate, but I’ll be the first to admit that if I had to choose between the two, I’ll take the ruby slippers.

So guys, listen. Get over how strangely similar the storyline is to Stranger Than Fiction, and try to not let the fact that you can pretty much guess how it’s going to end keep you from treating yourself to it. It stands independent enough to make me absolutely love it, it made me smile without thinking about it, it made me hope for the protagonist and root for the underdog, plus it made me giggle guiltlessly over puppy love’s naivety. Refreshing. 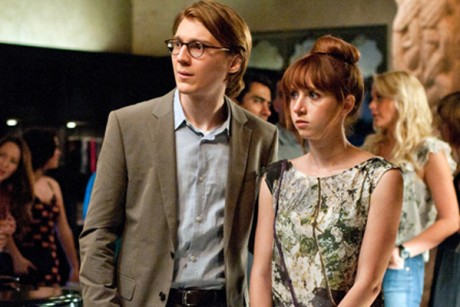 « Is there an E-List?
Endless Entertainment from the sidelines of the Olympics »