Campaign for new Kings of Comedy 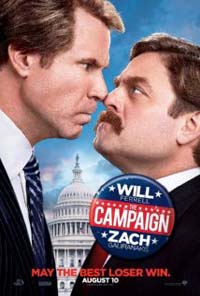 How many of you guys go into funny movies thinking for SURE you’ve seen all the funny parts in the previews. And furthermore, thinking that although it may find the occasional chuckle from deep within your inappropriate subconscious, that ultimately, it’s a stretch. Don’t worry—The Campaign is not one of these. Well, it definitely pulls from deep within your inappropriate subconscious, but it’s absolute hilarity thanks to its avoidance of premature punch lines. If you haven’t seen one of the eight hundred thousand trailers yet, the story is a parody of a local campaign for congressman, the delegates played by Zach Galifianakis and Will Ferrell. Zach gets an effeminate southern drawl to play the underdog city-loving Republican and Ferrell pretty much just gets a boner as the smug, perverted and corrupt Democratic incumbent. I’m going to be straight up—this flick is funny. Yes, I groaned a couple times, I pretended not to watch at one point, but ultimately, I laughed my ass off. Out of control, actually, every now and then. In my opinion, there are NOT two funnier people in the movie world today. I mean Mr. Bean was good in the opening ceremonies, but he’s got nothing on Jay Roach’s abilities to bring the funny. And the fact that we ever called something a comedy before Zach was around is beyond me. (Okay, that’s extreme – I absolutely still love, honor and laugh at Steve Martin and Martin Short). And I’ll reveal a guilty pleasure – I love it when movies twist present day pop-culture into the script. It makes the characters more a part of my life than they already were at the high-priced movie ticket. I already know that it’s not going to be for everyone. If you hate it, you hate it. BUT, knowing ahead of time that the vulgarity is at an all-time high, I challenge you to relax and let yourself enjoy this hell of a race riot.