Last year, TV turned the page back a few years, pulling our childhood stories (and nightmares) out of the fairy tale world and into a present-day illustration of death and destruction. Talk about an education. And where as some of these fantasy turned reality shows quickly ended their lives short of happily ever after, NBC’s GRIMM remains in the Channel Guide, with an ever-growing cult following and an unbelievable sense of suspense that attracts a larger viewership every single week. 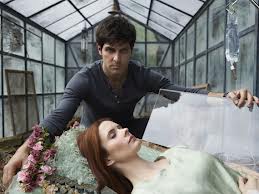 Season 2 launches after a drama-filled conclusion left viewers hungry for answers and curious for more face-morphing critters. Insite got to sit down with Co-Creators David Greenwalt and Jim Kouf (some of the brains behind similar fantasies Angel and Buffy the Vampire Slayer) to get some hints on what’s to come this season. Bottom line? You’re missing out on reliving your fairy tales all grown-up unless you’re watching. Tune in Tuesday nights at 9pm.

How is this season going to be different for our hero, Nick?

David Greenwalt: In the first episode Nick is going to face something unlike anything he has ever faced before. It will be bigger, and badder, and more dangerous, and more vicious. And Nick is growing into his own and part of that is learning more about his past from his mother and coming to grips with a lot of the emotional things that have happened to him. The second season, it is going to be him coming into his own, but he’s going to be challenged on so many levels. Not only with all these things he learns from his mother, but with complications from Juliet. And there’s a lot of bad critters now coming to Portland just for Nick. Because he is becoming known now.

Jim Kouf: We’ll also reveal some more of the deeper history with the Grimms and tie it to some more real events in the past.

How did you pick David Giuntoli to play Nick?

Jim: He kind of had a powerful presence and yet a vulnerability and kind of an astonishment that he could deliver. Because this is a guy who is rediscovering what he is, you know? And facing a lot of mysteries that he never knew existed. And you know – these guys win it in the room. In front of the networks and all the people who are involved with making the decision. So you really don’t know until the last moment.

David: He had this every man quality, which you can really project onto him as if it was happening to you. In a way, it’s one of the tougher parts in the show because everyone else is a little quirkier.

We know it’s a show about monsters, but are we going to see any sparks fly for Monroe? Or are we at the beginning of his end?

David: We certainly are. Of course there will be an attraction there with Rosalie. They each have a past and, the roads get a little rocky. Challenges will have to be faced and met. Well Monroe is going to be faced with some issues from his past that are going to come up. He’s also going to be faced with some life and death issues because of his relationship with Nick that he refuses to give up. There are a lot of forces in our world that do not like the idea of cooperating with what we call Wesen, which are the critters.

Jim: And he’s going to have another relationship with another officer…

So, what’s the deal with Nick being so mad at his mother? Where’s that coming from?

David: He has all kinds of feelings about the mother. He has loss and grief, and yes some anger. And a little bit of Ennui.

How is Mom coming back going to affect Nick and Monroe’s relationship?

Jim: Oh that’s a good question because we have to deal with that, and we do, and it’s a little ugly.

David: You’ll see a clash between Monroe and the mom. And Monroe is like, “Who is this insane person?” And Nick is like, “Well it happens to be my mom.” And so you’ve got all kinds of conflict going on and the mom does not approve.

Last year, Nick started bringing people in on the secret… What’s the plan for that this season?

David: Jim and I really try and have the show grounded in reality. And this is what would be happening. Now what will happen with all of that remains to be seen. You know, his wife didn’t take it very well. She thought he was crazy when he was telling her. Which had been his fear all along. You know, Hank, as Nick’s partner, would be exposed to stuff that a normal person wouldn’t be exposed to. And eventually he’s going to start asking questions and thinking he’s a little crazy.

And can we expect to meet any new characters this season?

David: Well there’s something called a “mauvaises dents.” That means bad teeth, It’s a sabre-tooth tiger kind of creature. He’s just a killing machine and to be feared. He could take out a whole village. Animals or critters, or creatures that are extinct in our world are not necessarily extinct in the Wesen world. But this is a very rare creature that requires a lot of support and backing to get him thrust into Nick’s life and making Nick’s life a living hell.

Jim: And there’s the (ceiling guterd). Like, good-natured people.

David: There’s something called the (nuclea veve) which is almost like a horse like creature except with translucent skin. Who’s definitely coming after Nick. We’ve got a sheep and wolf story. Oh and a spitting cobra. All kinds of stuff. You know, bigger and badder creatures this year.

Do we get to find out about the key? The coins?

David: Yeah, you’ll get the real explanation of what is involved and how deep this history goes. And a lot of people still want to get their hands on those coins.

What about fans who (gasp) have never watched before? Too much to catch up on to join the cult now?

David: The show is still designed to be a hybrid between a procedural and a genre show. You can watch the show without having all of the history of the show. But if you’re an avid fan, then you will see more things in the show.